The President skirts the 'hood (again) 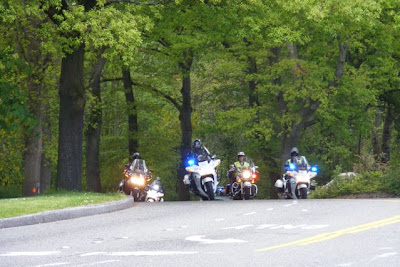 It always seems to happen this way (or at least it did the last time), but when President Obama comes to town and heads our direction, he never quite makes it into Madison Park proper. Yes, we can legitimately say that he traveled on Lake Washington Boulevard, which is the western/southern boundary of the neighborhood. But instead of turning up Madison and gracing us with his presence, he headed from the Arboretum on down to Denny Blaine for a fundraiser at the waterfront home of Ann and Bruce Blume (see video of his arrival here).  As far as we know, no one in the press (except for the Seattle Times) correctly called the neighborhood, however. It was variously described in news reports as Madrona, Madison Park, and even Broadmoor.  Well, all of these neighborhoods have a lot of potential rich contributors, and it's easy to get confused.

Say, look at this. Isn't the President's motorcade driving on the wrong side of the road? 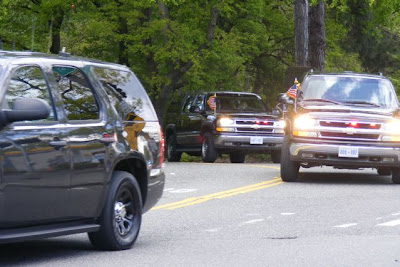 Anyway, the President's arrival was either very exciting (for those people who showed up to cheer as he passed) or very irritating (for those many drivers stuck in traffic delays resulting from blocked roads due to security).  Maybe next time he's in town he can turn east on Madison.  We're relatively friendly down here, after all.

[Thanks to David Berryman for taking these photos and to his partner David Chapman for forwarding them!]
at 9:29 PM