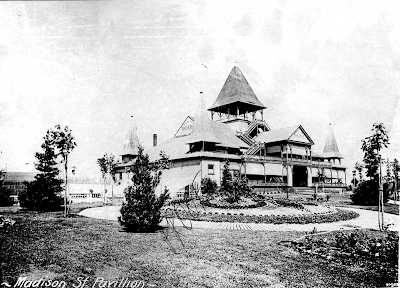 In Madison Park’s early days this was very much a beach community, with lakeside amenities including a boardwalk, a bandstand, bathing pavilions, boathouses, and a ball park. In the late 1800s and well into the early 1900s, the centerpiece of Madison Park entertainment was a large Victorian structure on the Lake known as the Madison Street Park Pavilion. The photo above, from the Seattle Municipal Archives, was probably taken around the turn of the century. The caption on the marquee is “Madison Park Theatre.” In her book, Madison Park Remembered, longtime Madison Park resident and author Jane Powell Thomas states that the Pavilion's auditorium seated 500 and there was outdoor seating for hundreds more. Another major feature of the building was its large covered observation deck at the top.

The photo below, from the UW Libraries Collection, taken around 1890 by photographer Arthur Churchill Wallace, shows the structure from the beach side. The photo is labeled “Seattle Pavilion at Laurel Shade, Lake Washington.” Laurel Shade was the name of the estate of Madison Park founder John J. McGilvra, to the south. The beach community was apparently known as Laurel Shade until McGilvra donated a large section of his Lakefront property for a park, initially known as the Madison Street Park, later shortened to just Madison Park. 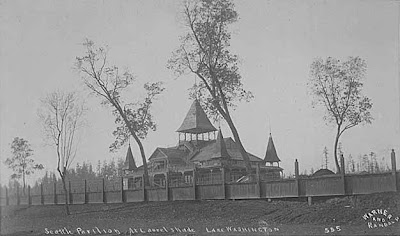 This photo by Wallace, also from the UW Libraries Collection, shows the entrance to the Pavilion.
. 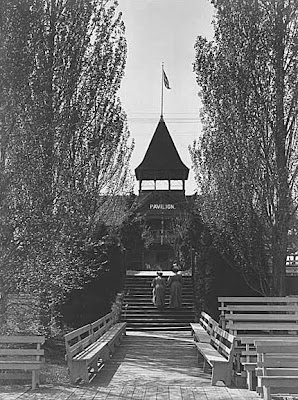 Below is a great shot from the Seattle Municipal Archives showing the “Meiers Band” standing in front of the Madison Street trolley car, with the Pavilion clearly visible in the background. Based on this photo it’s evident that the Pavilion was located just to the south of Madison Street, two blocks north of McGilvra’s Laurel Shade compound (now known as the Reed Estate). According to author Jane Powell Thomas, the Madison Street Cable Railway was the builder and owner of the Pavilion. McGilvra had donated 21 acres of waterfront property to the Cable Railway to induce the Company to run the trolley line from the top of Capitol Hill to the Lake, she says. It was the Cable Railway that initially developed Madison Park "for the mutual economic benefit of the McGilvras" and itself. Thomas lists 1889 as the date the cable car began running to Lake Washington and 1890 as the date the Pavilion was completed. The structure burned to the ground in 1914.
. 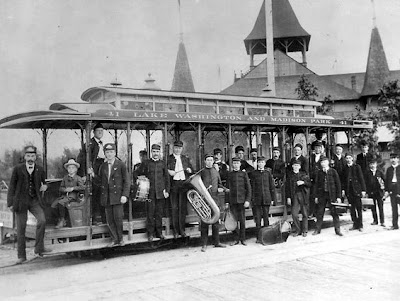 Down on the water there were three compatible and elaborate “bathing pavilions” or “bandstands,” depending on which caption you believe. Here’s how they looked, circa 1885, in another photo by Wallace from the UW Libraries Collection.
. 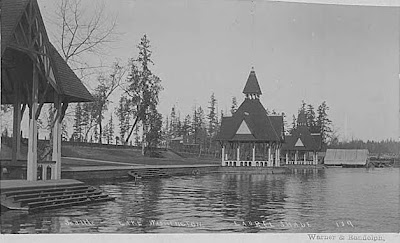 This picture from the collection of the Museum of History & Industry shows canoeists enjoying a day on the Lake in 1910, with the mini-pavilions in the background.

Here is a great shot (provided to us by MPB reader Don Petit) probably taken around the same time, or perhaps a bit later. It shows the Lake scene looking south from a dock, probably at the end of Madison Street. 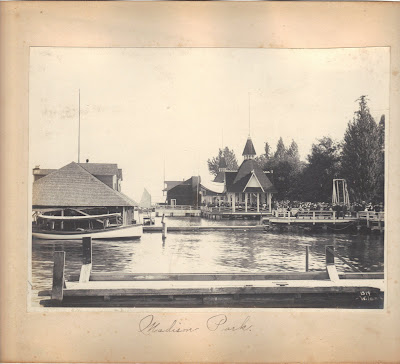 This is another shot by Wallace, which shows both the boathouse and two of the bathing pavilions looking south from the landside. Note the wooden boardwalk and swings. 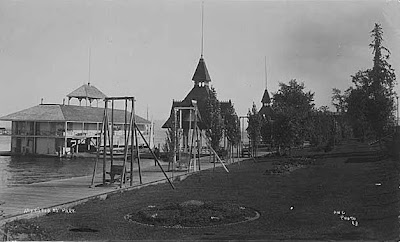 There’s more, but we’ll stop here with this lovely photo shot by an unnamed photographer, circa 1892, showing a steamboat heading out from the Madison Street landing. 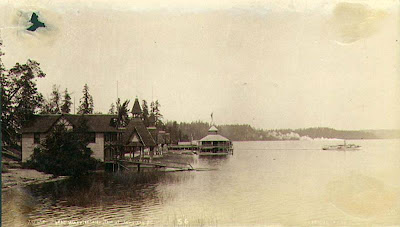 [Click on pictures to enlarge. To see all of the MPB postings on the history of Madison Park, including this one, click here.]
at 9:30 AM