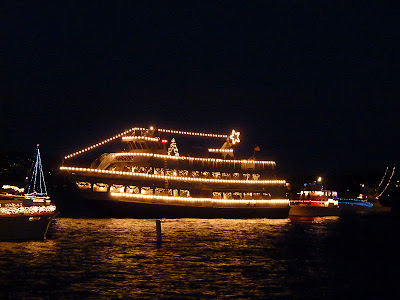 As regular readers of this blog know, there is officially one and only one Christmas Ship--all of the rest of the boats following in its wake each year are simply holiday hangers-on.  Just so we don't get an irritated email from Argosy Cruises (which owns the "Christmas Ship" trademark and hates to see it misused), we're reporting unofficially that "The Christmas Ships" will be arriving at the Madison Park Beach two weeks from today: Saturday, December 17, at about 4:55 pm.

This year the on-boat live musical entertainment will be The Dickens Carolers, while the on-shore refreshments will be provided courtesy of the Madison Park Business Association and Community Council, Park Shore Retirement Community, and Starbucks.

As always, you better get there on time or you'll miss the show.  The ships will start heading north at about 5:15 on their round-about voyage back to Kirkland.


'Tear down that fence!' revisited

The simmering debate over the proposed removal of the chain-link fence at Swingset Park moves into a new phase next week, with the Board of Park Commissioners meeting on Thursday, December 8, to formulate a recommendation to the Parks Superintendent.  The meeting will begin at 7:00 pm in the Parks Administration Building, 100 Dexter Avenue N. The Commissioners will not be taking any further input from the public at the upcoming session, but that probably won't stop a lot of interested parties from Madison Park from showing up to hear the deliberations.  No word on whether lakeside condo owners will again be chartering bus to get residents to the meeting.

Those interested in hearing about the fence-removal issue from the Superintendent himself will get a more convenient opportunity to do so when Christopher Williams, the acting Superintendent, attends the upcoming Madison Park Community Council meeting on Monday, 7 pm, at the Bath House.  The last time a representative of the Parks Department appeared at a Community Council meeting, the results were judged less than satisfactory.  This event, like the last one, is likely to be jam packed.

The public is invited to weigh in on some "preliminary ideas" for the new SR 520 corridor between I-5 and the edge of Lake Washington. The feedback session will be held on Wednesday, December 7, at the Museum of History and Industry (MOHAI), 4-7 pm.  It doesn't appear that the Washington State Department of Transportation has posted these design concepts on the 520 website as yet, but there is a lot of other background information there, including the presentation made at a public session held in early November (to access, click here.) Perhaps even more interesting, in view of the fact that the actual floating bridge design has yet to be finalized and graphically portrayed in a side view, is the fact that WSDOT at some point posted the "SR 520 Bridge Architectural Design Principles" online, which we just discovered.  Interesting reading (and lots of illustrations) for those who care to take a look.

Originally, tolling on the 520 floating bridge was to have begun last spring.  We all know what happened thereafter (though with no one losing their job, as far as we're aware, over what has become one gigantic black eye for everyone involved).  Ironically, the electronic tolling system is called Good to Go, though at least on SR 520 it has proven to be Not-Good-Enough to Go to this point.  Supposedly before the end of the month the glitches will have been fixed and the money will start rolling into the State coffers.  It figures that you can't sign up for Good to Go at the present time, due to another "system upgrade" currently underway.  That upgrade should be in place and the site back in operation by 7 am on Monday morning.
at 2:30 PM