A survey of Madison Park road ends: Part One 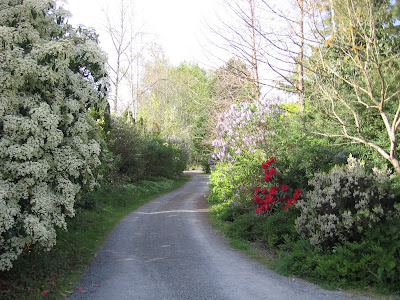 There are 149 streets in the City of Seattle that end at the water’s edge. These road ends are usually the unintended consequence of early City mapping, but they often provide a public right-of-way to shorelines where only private access would otherwise exist. This is not the case in Madison Park, of course, where our long and popular Madison Park Beach gives us immediate, large-scale access to Lake Washington. Nevertheless, Madison Park also has six of the City’s shoreline street ends, a few of which have been turned into lovely community jewels. While some of the road ends are fairly well known—at least to Madison Parkers who live in the immediate vicinity—others are more obscure.

This is the first of a series which will explore each of these waterside amenities, starting today with our northernmost waterfront road end, the one at 37th Avenue E. This particular public access point, which is certainly the most wild and secluded in Madison Park, is also the most ironically placed. It’s ironic in that the street for which it is supposed to be the road end actually peters out many blocks to the south (at E. Garfield Street) and doesn’t even extend into the Canterbury neighborhood. But 37th Avenue E. suddenly and mysteriously reappears on Broadmoor’s border with Canterbury and runs for one block from E. McGilvra Street to the waters of Union Bay. Cars can and do enter this road end, since several houses along the right of way have driveways that exit onto it. But about halfway down, the road end is closed to car traffic and a gravel pedestrian path winds down to the waterside, ending at a pier on the Lake. 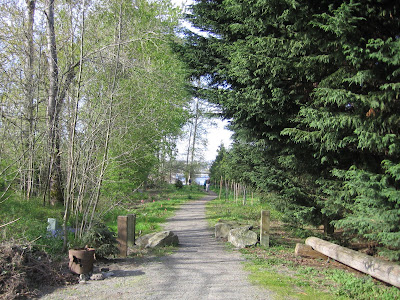 This road end became famous recently for the controversy over Broadmoor’s dredging operation in the area, the purpose of which was to improve the golf course’s ability to pump water from the Lake. Nature lovers were concerned about the possible negative impact of the dredging on area beavers, which fortunately returned once the dredging was finished. There is a beaver lodge directly across from the road end pier. Hense the "Beaver Lodge Sanctuary" moniker. 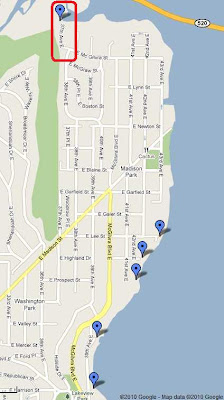 This road end has been the beneficiary over the last couple of years of the concerted efforts of many volunteers, who have removed the brambles and refuse and replaced them with trees and shrubs. A lovely community park has now been created where an overgrown mass of vegetation and garbage once blocked full access and obscured the view. The beautification effort has been headed up by Canterbury residents Gene and Liz Brandzel, who along with neighbors Lisa and Michael Anderson, carted eight truckloads of cuttings away from the site in their first season of cleanup. According to Gene Brandzel, the road end had previously been a general dumping ground, as well as a conveniently hidden party location for area teens. He says that he and his wife found at least 200 beer, liquor and water bottles on site when they first began their cleanup efforts. This was in addition to "innumerable used condoms, some a very patriotic red, white and blue." 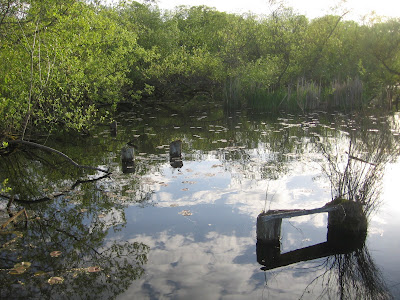 Volunteers, including Ken Myrabo, Elinor Kriegsman, Trent Jackson, Paul Fredrickson, and Issac Molitch, joined forces with the Brandzels and Andersons to remove weeds and blackberry bushes and add native plantings to the road end, many of which were donated to the cause by Molitch and his wife, Lisa Taylor. Sixteen families each sponsored a tree to be planted along the pathway.

Brandzel also acknowledges the help the volunteers received from arborist Joshua Erickson of the City’s Department of Transportation, “who has been fabulous in guiding us as to what to plant and in arranging to remove dead trees and opening the site to light.” Additionally, the City provided funds for benches to be installed at two locations on the site.

Periodic work parties are necessary to maintain and nurture the road end, which has become something of a wildlife observation point and conservancy within the precincts of our urban setting. There are few places in the City where you can get in touch with nature by enjoying the sight of beavers frolicking and herrons wading, but this is one of them. 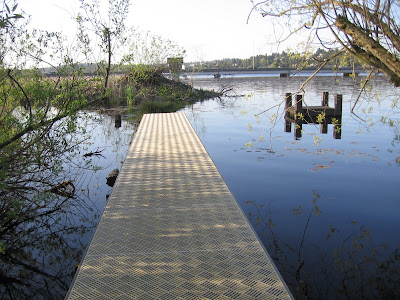 You have an opportunity to support the worthy effort of maintaining and improving this particular Madison Park amenity. A work crew of dedicated volunteers will be formed on Saturday morning to remove blackberry and knotwood shoots from the site. A second crew will be organized to spread gravel on the 350-foot path to the water. Those interested in helping out should contact Gene Brandzel at genebb@gmail.com or (206) 940-4489. 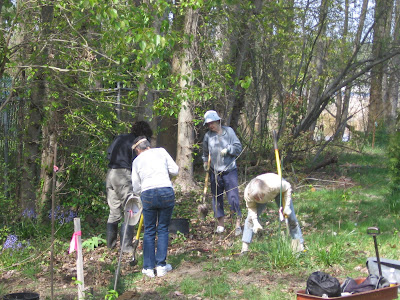 [Aside: Some may think that we actually have seven waterfront street ends in Madison Park. However, it only appears that way. As those who have been following the LOLA Project controversy know, E. Madison St. does not end at the water. It actually ends at its intersection with 43rd Avenue E. The fact that it looks like it extends to the water is an illusion, since the concrete roadway is actually the property of the City parks department and not the Seattle Department of Transportation.]