Why the police won’t come running 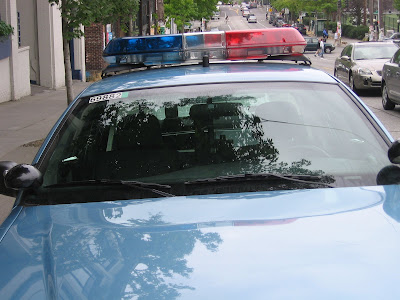 This is a story about home security systems and what you can and can’t expect in terms of Seattle Police response if the alarm is triggered. Don’t get me wrong. Assuming that your alarm works correctly and that your home security company does its job properly, you should expect that in most instances the police will quickly be on their way. But if you think that any time your alarm is triggered you will get an automatic and immediate police response, don’t.

This is how I know. A couple weeks ago, my wife and I were out walking our dogs when we got a cell phone call from our security-alarm company telling us that the motion detector in our basement had detected a possible intruder. Should they notify the police, they asked? Yes, I said. We were about three blocks from our house, so we rushed back to the general vicinity; and, along with several of our neighbors, we awaited the arrival of the police. After about a half an hour I decided to check out the situation for myself. I walked around the house to see if there was any evidence of a break in. There was none. I opened the front door and heard the interior alarm on, but it appeared there was no one in the house. Perhaps an animal? An upstairs window was open, so a bird or rodent could have entered. But after checking the house thoroughly, we found nothing. False alarm.

About an hour later, a good 90 minutes from the time that they had first been called, the police arrived. I had already called both the police and the alarm company to tell them that it had been a false alarm. But there they were. The two officers confirmed my identity and said that they had not been told that it had been a false alarm. Not that it would have made any difference, they said. They would have still come to check, since anyone could have called the police to say it was a mistake—even someone who had broken into our house.

Since I happened to have a couple of police officers standing in my front yard, I naturally took the opportunity to quiz them on why, exactly, they had not rushed to the scene of this possible crime. Their explanation provides an object lesson from which my neighbors with home security systems can benefit. Here’s the short answer on why they didn’t rush to my house: lack of police resources and a resulting need to prioritize their responses to potential crimes.

They told me that in their estimation, the East Precinct probably deals on average with 20 or more false alarms a month. With regard to motion detectors, they said, it is much more likely that there will be a false alarm than a real one. This is especially true in the summer, when windows are more likely to be open and false alarms can be caused by things blowing around in the house, such as curtains. Animals moving around the premises and system malfunctions (as in our case) are other causes. So in the end, responding to home-security alarms is just a low-priority police dispatch. In fact, they said, even if they had been rushing to my house but had received a call about any other police need, they would have been diverted to handle that issue before responding to my alarm.

And here’s another point they made that applies to Madison Park in particular. There are no longer any regular police patrols through Madison Park. Relative to the rest of the East Precinct, there is just not enough crime here to justify having police resources tied up driving around the Park when they are probably needed in the rest of the Precinct, which includes Capitol Hill and parts of the Central District. Therefore, it would be an unusual situation for there to be a patrol car nearby when a Madison Park home alarm goes off, they told me.

Well, that’s good to know (I guess), but what value is my home security system if the police are hardly ever going to be arriving in time to catch a burglar? The audible alarm is certainly a deterrent to some housebreakers, they said, but it is more likely to be effective if it is audible to the neighbors than just audible inside the house (as ours is). Someone who breaks into a house is going to be concerned about being seen in the act, so home security systems can be effective in causing a burglar to leave or at least leave more quickly than otherwise. Make no mistake, they said, if it is clear that a break-in really has occurred (as when a neighbor calls 911 and confirms seeing the crime taking place) the police are immediately dispatched. My neighbor was able to confirm the truth of that statement earlier this month.

A home security system can be an excellent way to get automatic police or fire response in most circumstances (for example, if a smoke or heat detector is activated or if you press one of the emergency buttons), but it is by no mean automatic in all circumstances. Now you know.
at 6:32 PM